Tattoo of Your Eagle Scout Award?

So I normally don’t blog on issues like boy scouts, but the story I heard this weekend was just too good to escape my blog.  This weekend, we took a group of boys out to the range to shoot some clay pigeons. When we got the range, we unloaded our shotguns and waited for the person who was in charge of releasing the pigeons.  In a few minutes an old Bronco II rambled up and a kid in his mid twenties hopped out, threw down his cigarette, stomped it out with his cowboy boot, and announced it was time to get going. He gathered all the boys and the first question he asked them was how many were Eagle Scouts.  About half of us raised our hands.  He did as well.

With that, he tore open his shirt and sure enough, right on his chest was emblazoned his medallion. It looked like this. 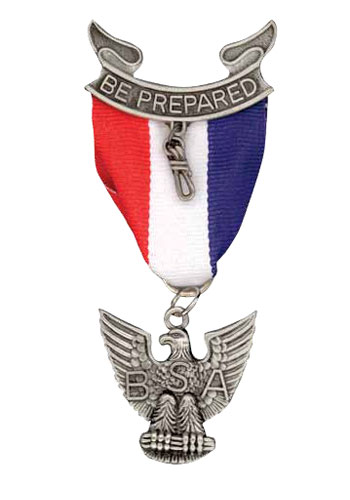 He then told the story about how much he wanted a tattoo when he was a teenager. His mother told him the only way that would happen is if he got his Eagle and then he could get a tattoo of his award. So that is what he did.

So all you moms out there who really want your boys to get their Eagle, here is a way to give them an incentive. Offer to pay for an a tattoo of their Eagle award.

Since my son already has his Eagle award I told him he too could get an Eagle tattoo. He looked at me like I was nuts.